Last Friday night, after eight months of Friday nights holed up at home, I rolled out the front door of my apartment building and into another dimension. Alternately clomping uphill and whooshing down slick stretches of slanted pavement while passing masked parents strolling with babies strapped to their chests and diners occupying the restaurant tables spilling onto the streets, I steered myself to Dreamland, a weekly Friday night roller dance party I had only heard about but never thought I was likely to attend. It was held at the outdoor skating rink in Brooklyn’s Prospect Park, with a ticket run limited to facilitate skating at its most socially distanced. Festive costumes were suggested (the night’s theme was Studio 54), and masks were mandatory—a tiny price of entry to join a subculture whose endemic joy and freedom are the very antithesis of life in lockdown.

Should you find yourself ready to break out of your petrified little bubble and venture into the world, you could do worse than to strap on a pair of roller skates. Before mine were a key to a fantasy world, they were just a fantasy. As summer drew to a close and a return to Zoom schooling in New York City without parties, or plans, or subway rides reared its ugly head, there was only one thing that made life more bearable: the viral TikTok videos and Instagram Reels featuring heavenly roller creatures. After stumbling upon this visual bounty, I was hooked. It is impossible not to feel a jolt of cheer watching Senegal-born Berliner Oumi Janta dance on her skates with majestic theatricality. And when Ana Coto does her signature strut down the empty streets of Los Angeles, exuding an alloy of unvarnished happiness and laissez-faire sexiness for her more than 2.1 million TikTok followers, something like ASMR washes over me. Coto’s mesmerizing moves have even caught the eye of Dua Lipa, who cast the Puerto Rico–born phenom along with Coco Franklin and Kelsey Guy in the music video for her pulsing disco anthem “Levitating.” Slip further down the roller rabbit hole, and you might find yourself watching a mother-daughter skate session that Maude Apatow posted of herself and Leslie Mann having slinky fun in an empty California parking lot or Stevie Nicks’s hilarious TikTok debut: a clip of herself sitting on a piano bench and singing her 1977 hit “Dreams” while lacing up her spanking-clean roller skates.

For the first time in three decades, since the days when I collected cassettes of a rising star named Madonna, I had an overwhelming urge to buy new roller skates—an impulse, I soon learned, that was not unique to me in the present moment. “Roller-skating has blown up in a way that I was not prepared for,” says Adrienne Cooper, the 25-year-old founder of Chattanooga-based skate brand Midnight Roller. “We only started selling skates in April, and we’ve been completely sold out ever since,” she says of the small part her company has played in what has become a nationwide roller skate shortage—the side effect of a pandemic-incited roller-skating craze that presents a more dynamic alternative to the sourdough society. From Australian skate brand Impala, known for its fruity and flowery pastel boots, to Midnight Roller’s more disco-leaning Moon Boot Roller Skates, which come in shiny metallics and colorful suedes, the e-commerce websites all conveyed different versions of the same message: “sold out.”

But don’t call it a comeback. “We’ve never stopped; we’ve never gone away,” says Tanya Dean, a longtime Brooklyn-based skater who points out that roller-skating has been entrenched in communities of color for decades, and that the roller disco boom, which lit up the late-’70s, was just a blip in a long continuum. You can watch videos of Dean’s synchronized roller dance troupe, Sisters in Motion, on YouTube or sign up for a skate skills class with her via Skaterobics, the skate skills school that she founded in 2010 and which went virtual in March when COVID-19 shuttered rinks and exercise studios across the country. A former corrections captain at Rikers Island prison who needed a release valve, Dean found her way to the world of skating after winning two NYC Daily News Golden Gloves boxing championships. “I had negative spirits and I needed an outlet,” she explains. “Boxing was too much and I was worried about the long-term ramifications. I needed something fun and energetic.”

The pure joy of skating is addictive in and of itself. When I finally tracked down my own pair from New Jersey manufacturer Chicago—blinding white with bubblegum pink wheels—their retro charm immediately lifted my spirits and reminded me of the afternoons I used to spend wearing grooves into my childhood bedroom’s warped wood floors with my rainbow skates. But its bona fides as a legit workout have only added to its post-quarantine appeal. According to Cort Wahlig, president of the Roller Skating Association International, skating burns between 350 and 600 calories per hour. “It’s easier on your joints, like your hips and knees, than high-impact exercise,” Wahlig, a former national champion, tells me. “It works out everything at once: your abs, glutes, thighs, arms, even shoulders.” It’s true. My pandemic passion, which has become my primary mode of transportation and my favorite form of recreation, has rewired my body—and my brain. I can no longer walk down the street without studying the pavement for treacherous fault lines and smooth patches to revisit (no surface is equal to the slippery-floored aisles of Whole Foods, as I discovered the only time I successfully wheeled past the guards), and I feel especially spent at the end of the day—and hungrier. I’m not just skating like a teenager, but I’m eating like one too. And when Ana Coto’s face beams onto my computer on a recent Monday morning, I’m squealing like one. The roller-fluencer has agreed to virtually school me in her signature “sexy strut.” My superthick bedroom carpeting turns out to be an excellent starter surface, while more experienced home rollers favor plastic chair mats intended for home offices (all the better to facilitate speed and protect wood floors). The recent spike in Zoom classes allows instructors and students to keep a safe distance while making skating an indoor pastime that can be mastered all year round. 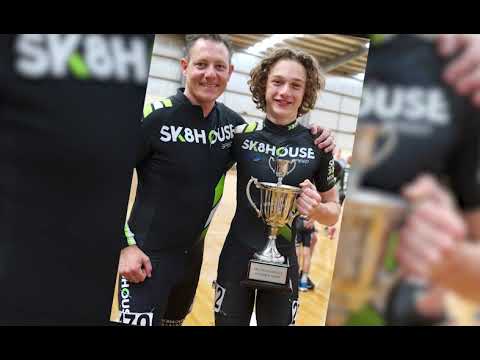